This year we had a bit of an odd October. The beginning of the month got cold fast. It was almost like Mother Nature saw the calendar change to October 1st and turned off all heat. We hit freezing temperatures in the first few days, which continued for the first two weeks of October. We had figured that we had until Thanksgiving weekend to clear the yard, but were a little mistaken.

We still wanted to salvage the vegetables that were left in the yard so we made a push to get everything out of the ground, picked, cleaned and stored for winter. This also meant clearing out all of the plants and getting the beds ready for winter. 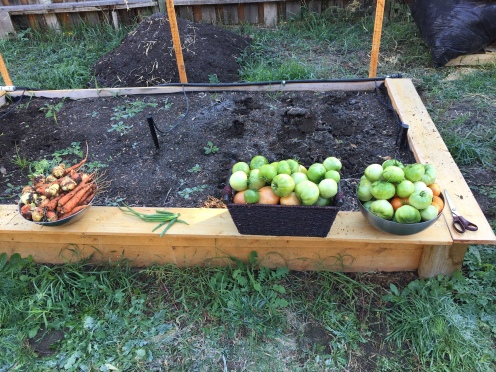 We started with our raised beds where we had some onions and carrots still growning. The greens on the onions were mostly done due to the early frost, but there were a few that had not started sliming up yet, so I cut those and put them in the fridge for use as soon as possible. The bulbs were beautiful and fragrant, though not very big. Unfortunately I don’t think we dug them deep enough into the soil so we ended up with wide, flat onions. But tasty none-the-less!

The carrots were our second batch for the summer. We had already harvested a full load, which we had frozen and pickled. This load will likely be cubed, slivered, coined and frozen for use during the winter. Although it would have been nice to have the extra couple weeks in the ground, they were of a decent size, and were so tasty. Ellie enjoyed the few that we gave her right out of the ground.

Next up we had our cucumbers. We had given up checking on them a few weeks prior as their leaves had gotten dusty looking and had started wilting. As we pulled the vines from their tangled beds, we realized that there were quite a few nice cucumbers for salads and a bunch for pickling. So we stripped them off to take inside and do one last batch of pickles. 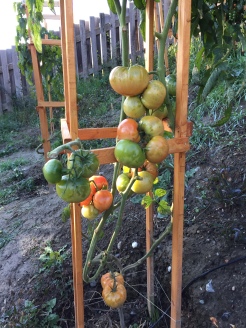 Our tomatoes still had a lot of beautiful round fruit on them, some just on the verge of turning and others that were still very green. Not wanting to waste those hard earned morsels, we picked all that were of a good size, leaving those that were smaller than our fist. Any that were already turning went onto our counter by the window, and those that were still green got wrapped in newspaper and stored in our boot room. Fast forward a couple weeks and we ended up using about half of the ones that were in newspaper. The other half had discolouration or had started rotting before turning. We think that the frost got to those ones and did enough damage to ruin them. Oh well, with half, I was still able to add 12 more cans of tomatoes to our pantry.

On the other side of the yard we picked our corn, which had been an experiment to see if we could grow it. We did, and despite the very late planting, we managed to get two cobbs that were edible in time. They were added to our dinner that night, and they were delicioius! Really looking forward to more corn next year. 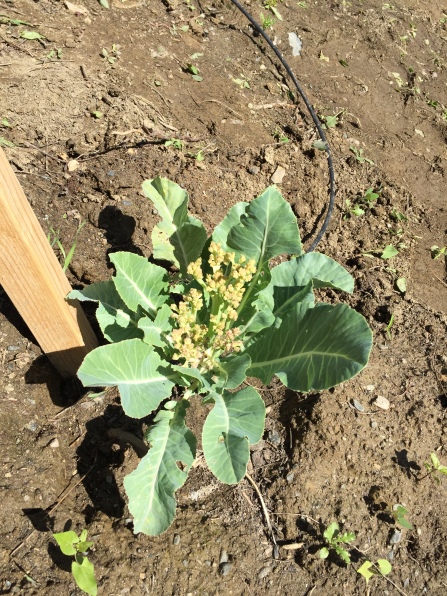 Our cauliflower never did really do well. But to be fair, we didn’t really prep where the were going, we just plunked them into the ground, which happens to be a little sandy. I did however manage one little floret, which was also added to our dinner. It was small, but tasty. We are hoping that once we have the beds made and filled with proper soil, that we will be more successful in growing broccoli and cauliflower. 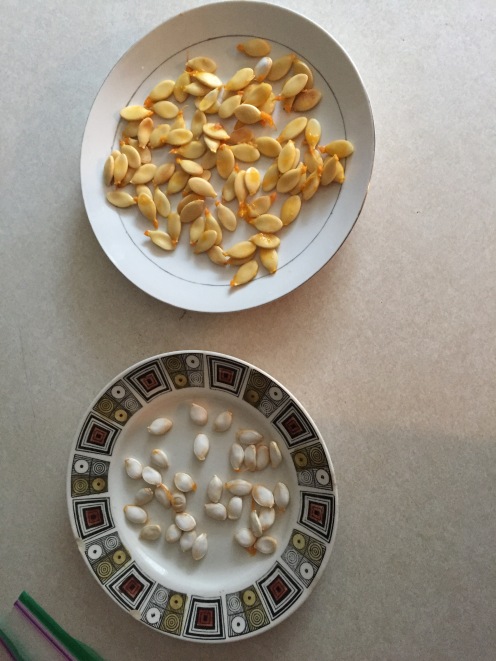 The squash that our neighbours had given us from their compost pile turned out great. We had two Kabocha squash and 4 buttercup squash. I also managed a small spaghetti squash from the seed I had saved from last year and planted. As you saw in my last post, I made a delicious Thai squash soup out of the kabocha and two of the buttercup squash. I had never cooked with either squash before, but it turned out amazing. I saved some seeds from those squash and am looking forward to growing more of them this coming year. My pumpkin never took hold. Last year, I had planted it over by my tomatoes and had managed one pumpkin. I will have to keep trying areas to see where the best growing location is for them.

Our strawberries amazed us. When we went out, the leaves were all frosted and we figured that they would die fairly quickly. Nope. For the next couple weeks they not only continued to grow, but actually sprouted new flowers and produced more fruit. We chowed down on them while we cleared out the yard. I think our haul next year will be fantastic, and hopefully big enough for some jam. We cut the runners and added the larger plants to the next two towers earlier in September, and by the first frost they looked strong and healthy.

The last thing we had to do was blow out our lines. Luckily we were given a 10 gallon air compressor for Christmas last year, so we decided to test it out to see if it would be large enough to blow out our backyard. You bet it was! It’s nice to know we won’t have to pay anyone to come and blow out those lines for us each year. Although, if we are adding to it in the next couple years as our beds develop, then we might need to look into doing one line at a time. We also took as much of the black lines from the left side in, so that the area would be clear in the spring to start digging. 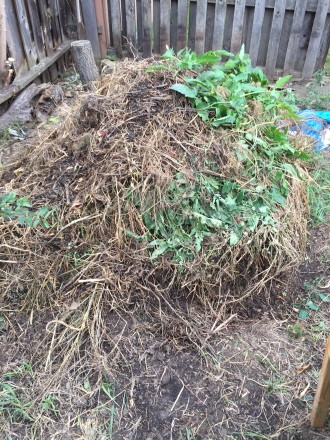 All of the plants that we took out of the yard went into either our compost bins or our compost pile. That was another experiment we started. We didn’t want to put the excessive amount of weed material into our compost so we had started a pile over in the corner of the yard to later take to a composting facility. By the time we got around to it we made a happy discovery. The materials were already composting themselves, and fast. The pile that we had started was now turning into some beautiful black soil at the bottom. We turned the whole thing and mixed it up in the hopes of having some really nice growing soil in the next year.

We think that it is composting so well due to the bug activity we have in our yard. Besides the abundance of Daddy Long Legs spiders, we also have quite a few other multi-legged friends…although I don’t think spiders can really be considered friends as they are just horrible and evil…. 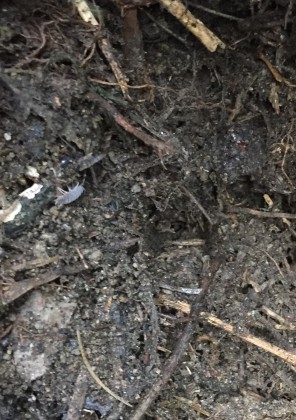 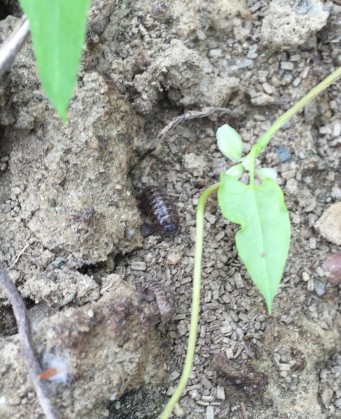 The little roly-polie bugs are by far the most common in our yard. After some research, I learned that they are called Armadillidiidae. Seemed fitting considering I called them armadillo bugs all summer. They are part of the woodlice family, which is another bug we definitely have. The main difference is that the Armadillidiidae can roll into a ball, whereas the woodlouse cannot. Both feed on dead plant material and help break it down, which is why we found a lot of them in that pile. It was like a smorgasborg for them! 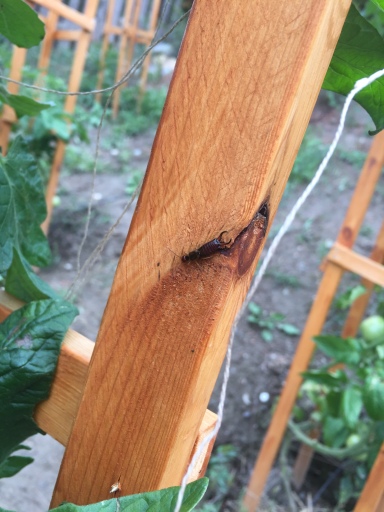 This pile has also attracted some unwanted attention of earwigs. Luckily they have been sticking to the yard and have not come up toward the house, but we will be addressing this issue in the spring. We only really started seeing them in the yard at the end of the summer, and always by the tomatoes and in the compost pile. Since they like damp, dark areas, both those locations make sense. The tomatoes had straw laid at the base to help keep the moisture in and help us not have to water as often. This would have created an ideal location for earwigs to nest. We may need to take some precautions next year if we continue to spot them.

We also found many centipede throughout our compost pile, which is where we previously had our log pile. Both piles provide an ideal habitat for them as there is often a large bug activity in those areas. Centipedes are mostly carnivorous and feed on the other bugs that they can find. They apparently have also been known to eat decaying plant when there is not another food source available, so our compost pile is perfect.

We also noticed a green shield beetle, which is apparently a very common beetle in gardens in Europe. I couldn’t really find anything about them in North America, however comparing the photos and characteristics, I am fairly confident that is what this little beetle is. It is also apparently a stink bug. It secretes a very stinky liquid, which it can often leave on your vegetables and plants. Luckily this is the only one we saw, and I didn’t notice any smell. I thought it was very pretty with its bright green coloring.

Our other visiting friend was this little cricket. I believe it is a bush-cricket, but am not fully sure. I was comparing it to photos, and the bush-cricket photo was the closest match and description. Either way, it just hung out on our flowers for the day, not making a peep and then was gone the next day. We didn’t see it or another like it all summer. 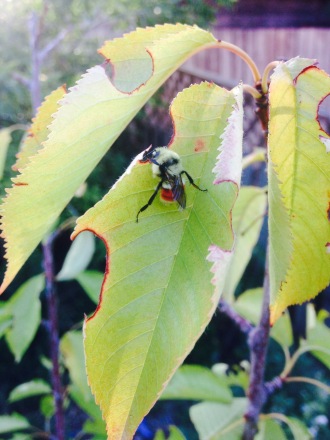 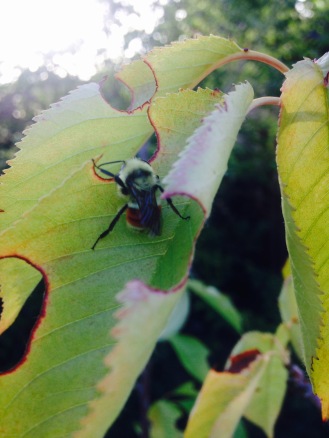 Last, but certainly not least….in fact, I would say the best for last, was the bees. We watched them quite a few times throughout the summer. They would buzz from one flower to the next. One of our viewings was of a very agile bee who did headstands in order to get right down to the best pollen. It would be resting just on its front legs, the rest raised up in the air, while it rooted around in the flower. It was quite entertaining. We are always happy to see the bees in the yard and are trying to plant a diverse range of flowers and vegetables to attract them. Next year we also plan to put in some nomadic bee houses so that they have a safe place to hide from predators.

Well, that is it for this post. I will likely be sharing our plans for the upcoming summer for the rest of the winter posts. That and maybe some recipes using our garden ingredients. Either way we have a full & delicious stock.