Just kidding…caps on…to our wall at least. We have finally done it. The large wall that runs diagonal is officially complete. Well, mostly. It will still need a little stain, but for the most part it is done. 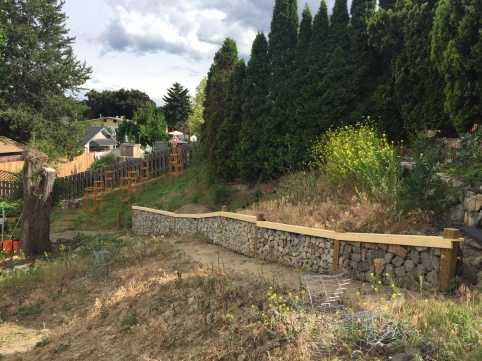 With all of the sections full of rocks, it came time to wrap the tops in preparation for the wooden caps to go on. Since it didn’t matter how it looked, I went the simplest route and just bent the fencing over, and wove it shut with some thinner wire. Some of the sections closed better than others, but overall it went well. 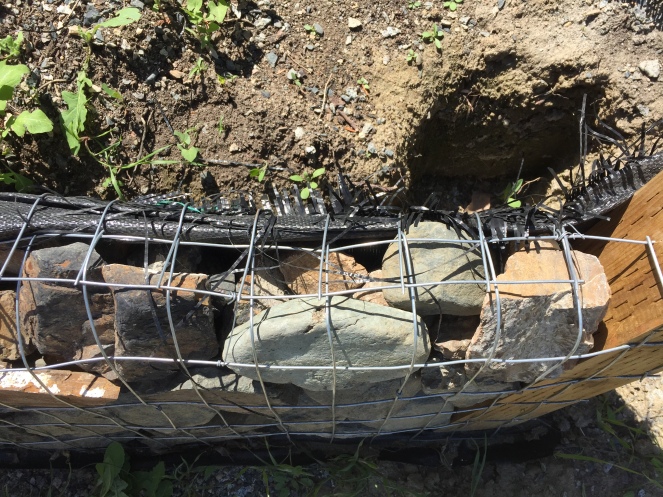 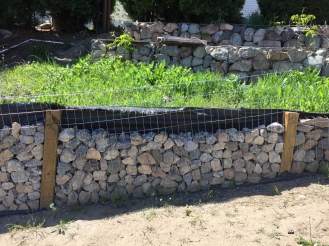 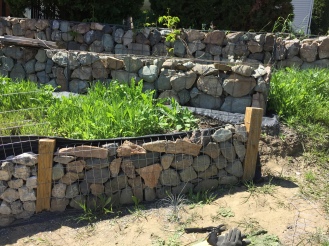 The next step was to figure out the caps. Now, I knew what I wanted it to look like, based on what I imagined in my head, it was just how to translate that to real life. Not a problem.

Using some scrap pieces, I was able to get the jist of how it was going to work and what size wood I would need to accomplish it. The posts are 4″ x 4″ fence posts, so I went with a 1″ x 6″ board for the top. I then used a 1″ x 3″ as a face-plate to hide some of the gap areas that were left on the tops. 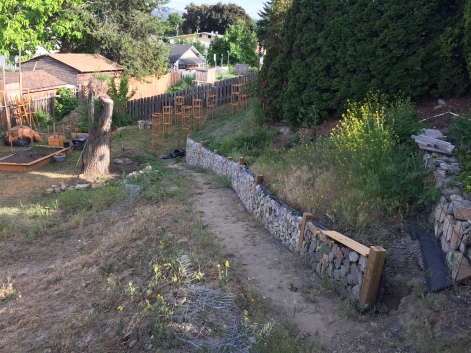 I was aiming to not have screws or nails or staples showing, so I used my Kreg jig to put in pockets for the screws to attach the 1 x 3 to the 1 x 6. This also helped with making sure that the boards were straight as some of the boards I picked up ended up with a little twisting/warping. 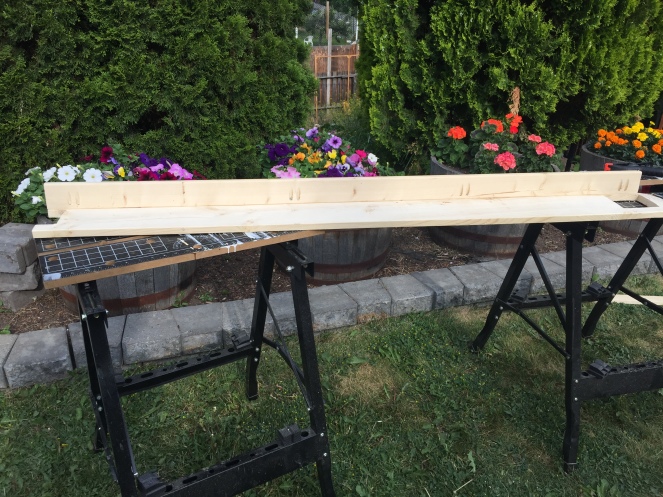 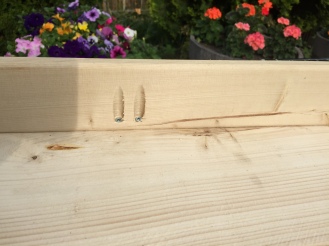 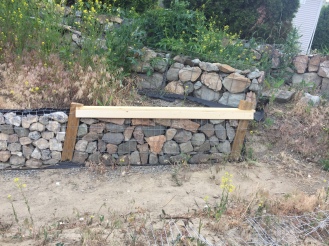 The first and last sections were fun because I wanted to have the top cap wrap around those posts. With all of the other sections, I cut the cap halfway along the post, and the next one started where the last left off, giving it the wrapped look. I also wanted to curve the ends so that there was no hard angles on each end. 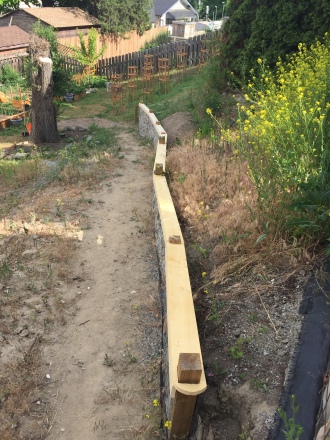 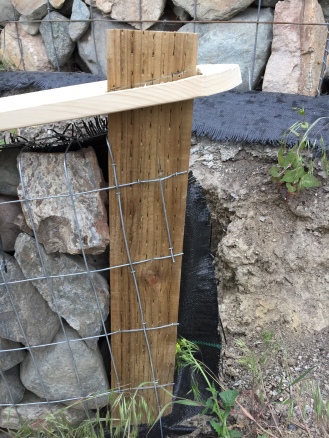 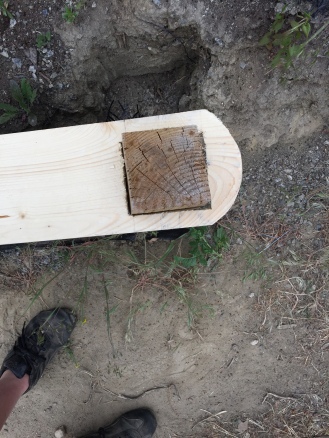 In the end it turned out exactly how I wanted it. There is one section where we are going to have to go back in and add a little rock to make it so that the cap/face-plate line up nicely with the one beside it without a large gap, but that is an easy fix. 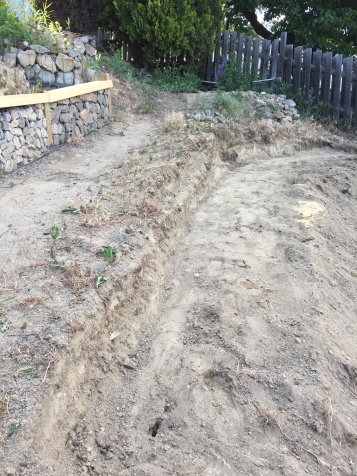 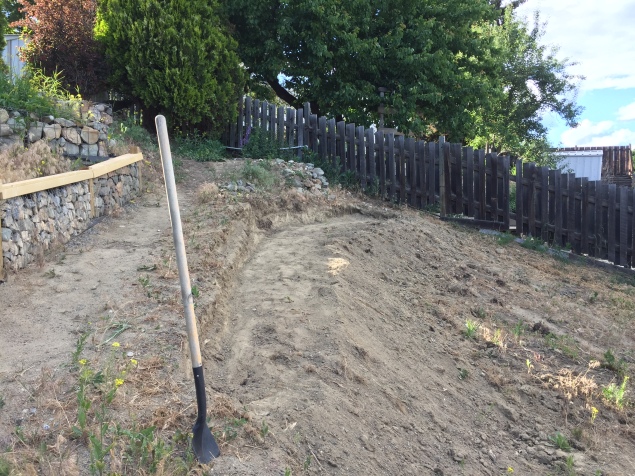 Now that we are done this wall, K has started digging in the bottom side wall for the main path. Once that is in, then we will start working on the next one down and continue in that fashion. I’d like to say we will complete all of them by the end of summer, but each time I say a date in this blog, we seem to start slacking, and don’t get it done. So, I will say we will definitely get one more wall completed by the end of summer, and any additional walls we complete will be a bonus.

As for a general update, the weather has been perfect for growing. Our plants are all doing really well. I have a large freezer bag full of strawberries already, plus a small bowl that we ate. Some of our peppers have started, and a few tomatoes are growing as well. Our blackberry bush that we planted last year has BLOWN UP, while the one I got from my cousin is dead (I didn’t think it would make it). We managed to get a cherry each, unfortunately the birds beat us to the other 5…we are going to have to figure out something for next year to stop that from happening. Our potatoes are coming along nicely, and K has been able to mound it once already. Our zucchini and cucumbers both have lots of flowers and should be producing some veggies for us soon. We can’t wait! 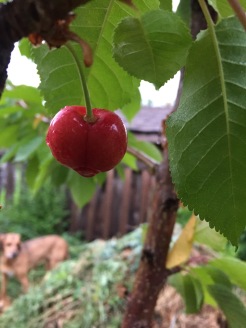 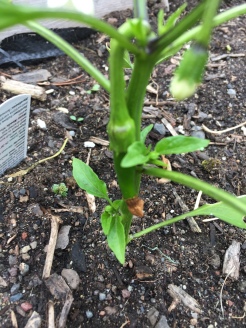 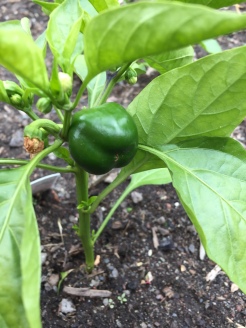 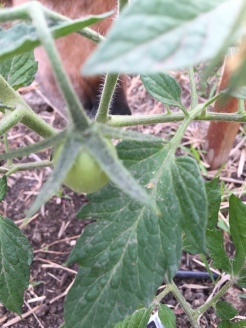 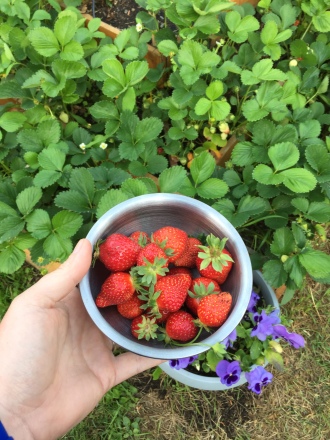 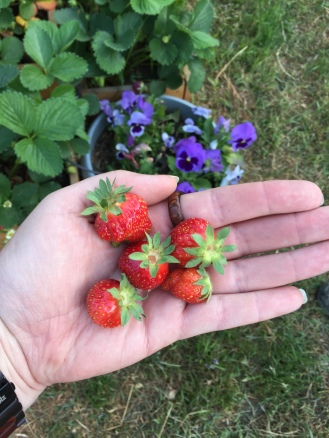 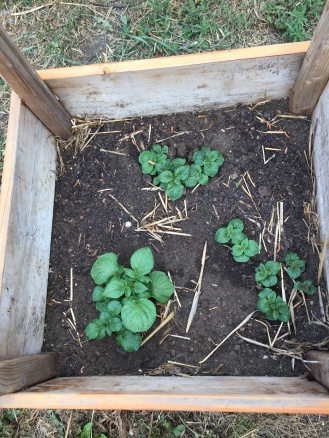 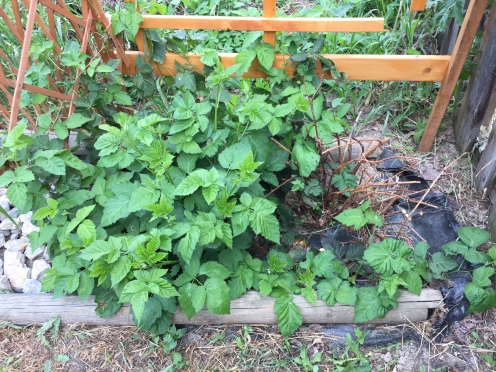 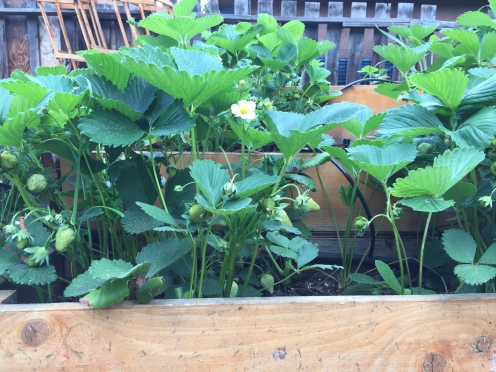