Throwing it back to a little earlier this year, I thought I would share one of the projects I worked on in our beautiful shop. I didn’t take a lot of photos as this was more of an experiment and I didn’t think the first draft would actually turn out as well as it did…lesson learned! Always take pictures.

Our front entrance area is not large, and there is a steep set of stairs as soon as you come in, so we do everything we can to keep that area clear so that guests don’t have to worry about tripping on something. With two dogs, that had become a bit more challenging and the railing along the stairs had become a hanging area for all of their leashes, collars, harnesses, etc.

I decided that I wanted to build a similar shelf to the one that the previous owners had left us by the entrance. I liked the size, the distance between hanging posts, the shelf that it provided and the wood colouring. So, I used it as my template and took all the measurements down.

I used my planer to bring the width of the wood down to just over 1/2″ thickness. The original shelf was just under 1/2″, so my new shelf ended up being a little bulkier. Once the wood was trimmed down, I determined how long I wanted the new shelf. The original was 30-3/4″ long, which was perfect for the long wall it was on, but the new shelf is on a smaller section of wall before the doorway to our kitchen. I didn’t want the shelf to take up the entire area, so I made the new shelf only 20″ in length. Both are 6″ in height.

The shelf portion was quite easy as it is just two straight pieces of wood. The tricky part was the edge pieces. The original shelf had a bit of a design to it that I liked. It was simple, but added a little elevation to the design. Conveniently, I had just purchased my scroll saw, so I copied the curves to the best of my “eyeing-it” talents could go and cut it out on the scroll saw. It turned out fairly similar, but had a few rough edges to it that needed some trimming…this was after all, one of my first attempts at using the scroll saw, and I don’t have all the tricks of the trade  yet. 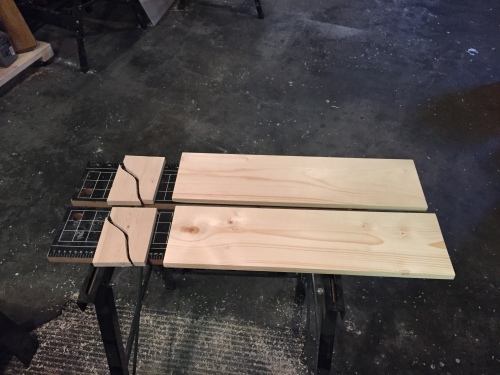 I pulled out some of my carving knives and shaved off the areas that needed some softer corners. It ended up working out great. Then I went over it with the sander to get any minor rough edges smoothed out and we were ready to assemble. Using my Kreg-jig, I attached the top and back panel together. I also used the Kreg-jig to add 2 pocket holes on each side for the back of the decorative edge piece, but didn’t want any visible pocket holes for it to attach to the top shelf. Based on the design and the fact that items would be resting on top and pushing the top shelf down onto the side pieces, I used some wood-glue to attach the top to the edge pieces. It worked, the wood was nice and straight so I got a good seal on it. 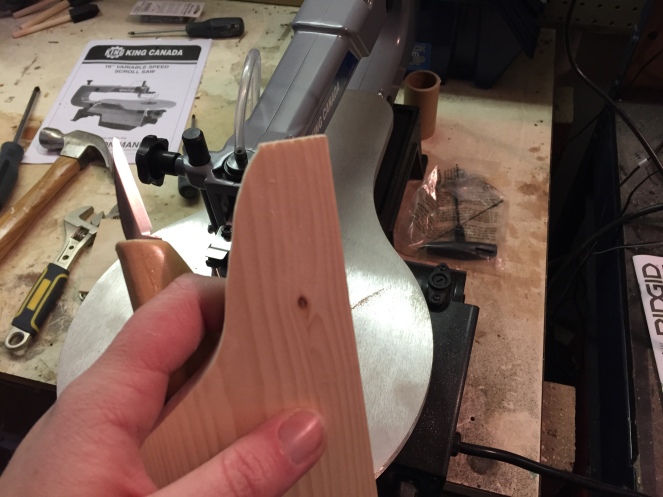 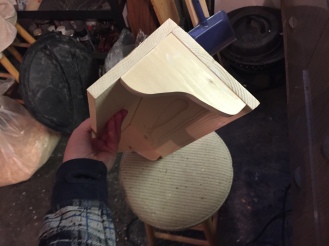 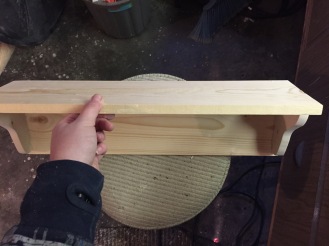 Now, I hit a small roadblock here, because I really didn’t want standard, boring hooks on this one. I also didn’t want the wooden doweling style hooks that the original shelf has either. I wanted this to be clearly made for the dogs, without coming off too hokey. So, I did a little searching and found some adorable dog bum/tail hooks that would be the perfect final touch to the shelf. They are great hooks, heavy cast-iron.

Once I received them, I realized that the bolts that they came with were too short for the thickness of the wood, and none of the bolts I had would thread properly into them. So, I came up with a bit of a solution. I unfortunately did not get pictures of this part, but I used my Kreg-jig to countersink some holes into the back of the shelf so that the bolts sat flush with the wood and allowed the bolts to reach and get securely fastened into the hooks.

This was a convenient figuring out of one problem, that lead me to not have to deal with a future problem. If I hadn’t counter-sunk the bolts, the shelf would not have sat flush against the wall, which would have had me re-do the mounting of the hooks, only to come up with this solution that presented itself due to a different issue. I love it when it works out that way. 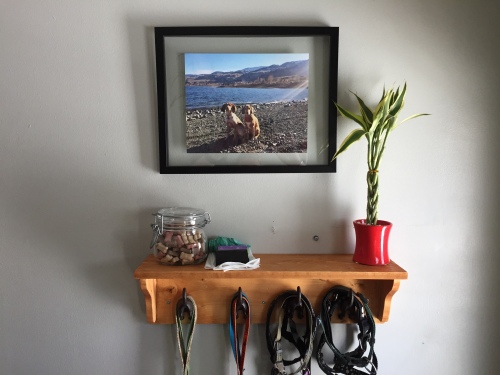 I found a stain that was similar to the original shelf. It was great, only one coat was needed to match it to the original shelf. After letting it dry, I hung the shelf and all the leashes, harnesses and collars now had a permanent home. I added a bamboo plant, a photo of the dogs and a treat bowl, and it looked like it was always meant to be there. If not for having to wait for the hooks, this project could have easily been completed in a few hours.