For the first time in 3 years, we have damaged one of the PVC irrigation pipes that is not buried in the yard. K is awesome and regularly weed whacks the back, weeded, area of the yard. For the first time, the weeds fought back and grabbed the weed whacked while Kurt was going around the strawberry tower. That same weed threw the blades of the whacker right into the irrigation pipe that comes out of the ground and up the side of the box. In the end, k beat that weed by evicting it from its happy home.

This will be the last year for the strawberry tower. It’s beginning to fall apart and I need to move it from that corner so that we can start building our gazebo. Because of all this, we didn’t want to have to dig out the PVC so that we could cut out the damaged portion and replace it. Instead we decided to try to patch it. I will say that if this were a permanent bed, we would go through the work of digging out the PVC and replacing it properly. 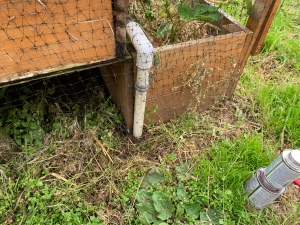 At first we were going to use some plumbing epoxy to plug the hole, but decided to try a bandaid first. Just to be clear, not a bandaid we would use if we cut ourselves, but rather a specially made bandaid for PVC. We made the bandaid out of a section of PVC cut in half. Simple right. I made sure to cut it so that it had a good border around the hole. We want to make sure it has good area to adhere to the main PVC line.

In order to get a good seal, I cleaned the area that I was going to glue together. Once cleaned, I covered it in a PVC cleaner and primer. This step makes sure that we get a good seal on the glue. 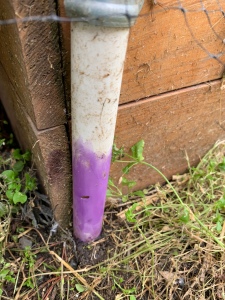 Once the cleaner & primer was dry, I applied the PVC cement. I made sure to put an ample amount on. This stuff is meant to hold high pressure water, but I still wanted to make sure that the bandaid was really glued down. 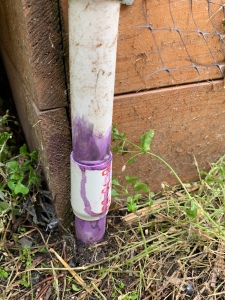 Once it was in place I ran a little extra cement around the edges to make sure I didn’t miss any spots. 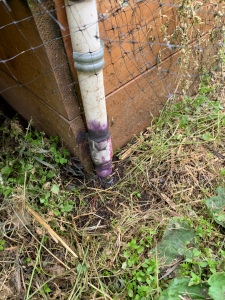 It has been holding strong for over a week, so it seems to be a good temporary fix for the season.