Joyful to be home after two amazing weeks cycling through Germany and Austria, we were eager to see how our plants were faring. We knew from updates from family that it had continued to be a wet summer while we were gone, but there were a few good days of hot sunshine, which should have helped our plants grow. We were also hoping for some of our tomatoes to be left as there were a lot of them prior to our trip on the verge of turning red. 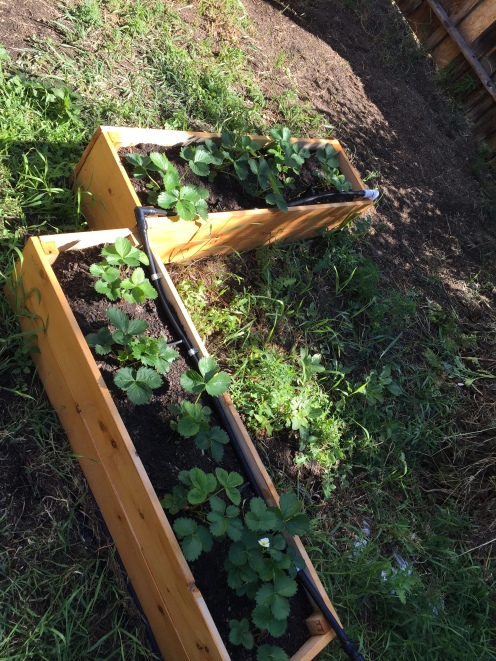 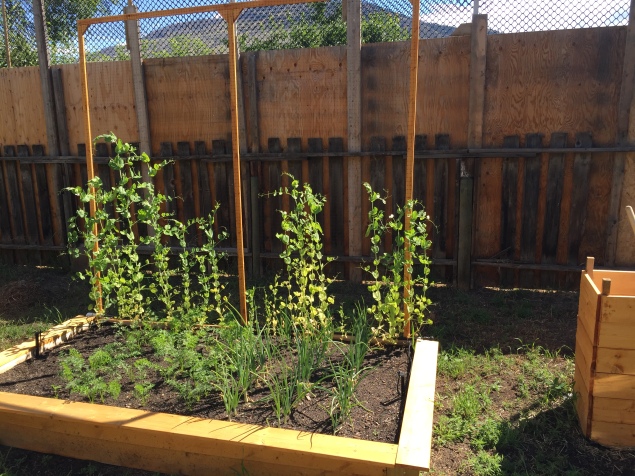 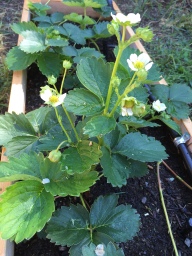 Low and behold out plants had exploded! The cucumber plants were growing well out of their bed (perhaps a few less plants next year), the strawberries were ready to overflow their boxes and had plenty of red juicy berries, and our tomatoes were peeking out the tops of their supports (we will need to add more support!). Our raised beds were full of delicious carrots, onions and beets. Our tester section on the left side of the yard was finally producing some squash and a few of our pepper plants had some peppers growing, despite the plant itself not growing in size. Even our corn was looking really good, though not yet producing any vegetables, but we weren’t really expecting them to this year anyways as we got them into the ground late. 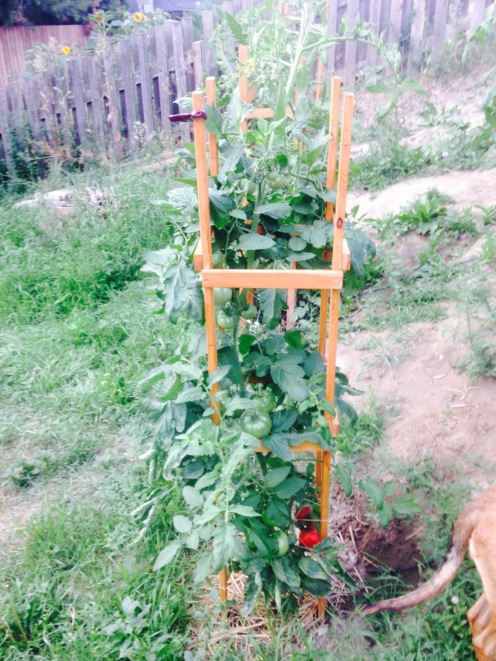 Our vegetables were not the only things exploding. The yard itself had taken on a jungle look. As we still have a lot of landscaping to do, most of the yard is still undeveloped leading to very quick growing weeds during the rainy months, which we seem to be having an abundance of. Prior to leaving on our trip, K and I had spent a few days weeding the back yard in hopes of it being somewhat under control when we got back. Well, it was wishful thinking! Our strawberry boxes were almost completely overrun from the weeds around it, and quite a few of those delicious looking berries had been nibbled on by the bugs. Our cucumbers that had overgrown their beds were holding firm on the thick weeds around it, and our tester area was difficult to determine where the actual plants ended and the weeds began. 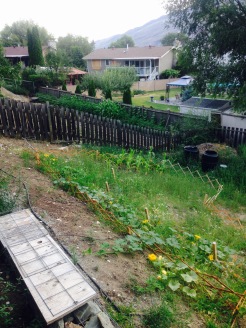 Up until our trip, we, and by we I mean mainly K, had been constantly weeding. We had done a couple of big days where we weeded for a few hours to get the yard looking somewhat cleared, however K was doing most of the work in making sure it didn’t get too overrun. Every two weeks we usually went out and did a bigger weed, with some puttering in between. This kept the weeds in check and allowed our plants to grow lush without too much issue.

The most difficult area is our tester area that we will be working on next year. As we didn’t want to put too much work into where we were planting, the water that is being drip fed to our plants does somewhat run down the hillside. Not a lot, but enough that we are watering the weeds almost as much as our plants. This leads to a lot of work. Once the yard is finished, that side will be terraced with landscaping fabric being placed about 2-3′ down each wall to help alleviate the large weeds from coming through. Also our terraced beds will be better controlled with watering, making sure to not have any over-watering or leakage to best utilize our water. We don’t want to be watering areas that don’t need it and would like most of our plants to be on drippers rather than sprayers.

Down at the bottom of the yard, K just gives that area a weed-wack, however due to the size of some of the weeds now, we will be plucking first, then wacking. Usually it is just long grass, but due to our absence those weeds that usually don’t get a chance to grow, have had a very good opportunity and have taken full advantage. 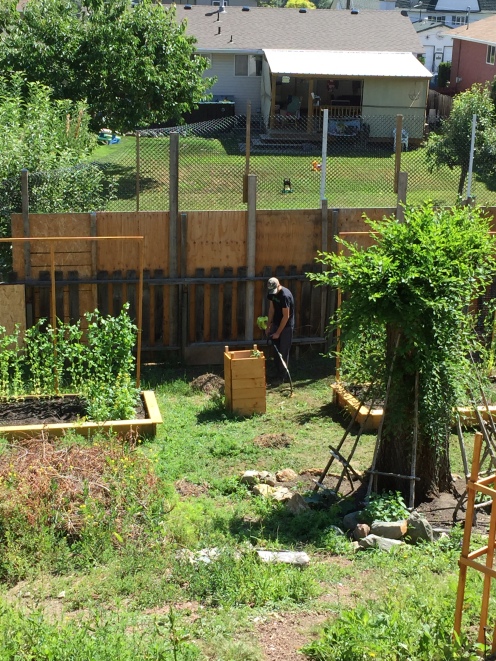 The only area that did not get overrun was our Tomato patch. We had done a really thorough job of clearing that area before we left and it managed to stay fairly clear. A few small patches of grass, but no large competing weeds sprung up while we were away. 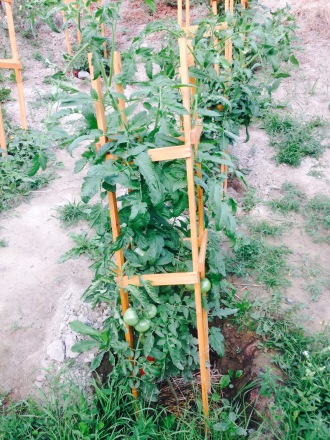 Our neighbour was kind enough to give us a cherry tree just before we left, and the poor little thing was fairly overrun, but still looking good. This week one of my chores will be to crete a little bed around it and include some landscaping fabric to help keep the weeds down around the base of the tree. We have some nice round landscaping ties that will make a nice size box around the tree. I will pull as much as I can around it prior to laying the fabric. From there we will likely put some nice river rocks around it. As with most things in the yard, it has it’s own drip feeder for now until it is well established, although we may just leave the drip feeder to ensure a healthy tree.

The control of the weeds would also likely be easier as well if we used some weed kill, however we refuse to use any chemicals in our yard as we plan on feeding ourselves from that area. I have done a few home recipes with items from the kitchen to help with our cement areas, however the product doesn’t seem to do much to the large weeds. I will spray a little of the concoction onto roots of stubborn weeds that refuse to come out of the ground, but in the end, it comes down to us just getting out there and plucking them from the ground. Luckily K enjoys spending a few hours a day back there puttering, pulling weeds, supporting the plans, checking on the bug activity, etc.

We are looking forward to the days when weeding in the back area is down to a minimum and the landscaping is complete. Weeding can be difficult enough, but throw in a slope and you will have muscles burning in areas you didn’t even know you were using! We take the weeds as a good sign that the soil in our yard is very fertile and will lend itself nicely to good crops for years to come.

Now that I have updated the blog, out to the yard I go to do some work!