Jiggered at how well the walls went together, we decided to start filling and levelling it as best we could.

A few years ago, when this project first began, we had all of our junipers torn out. As part of the clean-up, the company we hired made the slope nice and even and left a pile of fill/dead juniper needles in the back of our yard. They had said if we left it for a few years, that it would compost down to some nice soil. In order to fill the garden, we thought that we might as well break into that pile, rather than go and purchase some fill. We also have changed our plans once again. Due to the privacy where the compost is, we would like to switch that to the side of the yard that the dirt pile is currently located, and building our fire-pit/pergola in the more private corner.

K started filling the garden while he was off one day, managing 7 gruelling loads up our hill, using the cart that had almost completely flat tires. Although we have made the path less-steep, it is still a tough task bringing a loaded cart up by ourselves. K and I did another 14 loads together to get the garden filled to the point that we wanted it filled with dirt. It definitely was not easy going with flat tires, so before we fill with rock, we will be getting those wheels replaced.

The garden bed ended up more levelled than K and I thought it would be. Prior to filling it, it looked like it would have a steady slope down to our first Gabion wall. There is definitely a slope, but it is a very minimal one. It was a pleasant surprise. Trying to eyeball anything on the hill is difficult.

We wanted to make sure that the soil didn’t pack down to much and end up lower than we wanted it, so we started to use our pounding tool to pack it down and see where it ended up….unfortunately, without any precipitation in March, the soil was very dry and it just kicked up a tonne of dust. So we went to plan B and gave it a very thorough soak and let it sit for a few days, some of which included some rain. The level didn’t drop by much so it was on to the next step.

We removed all of the top caps from the wall around the top side and swept them clean. Lots of earthworms, armadillo bugs and ants were disrupted, but they found new homes fairly quickly. The ants, may have a more difficult time, but I am sure they will re-route some tunnels to make it work. Next we started laying out landscaping fabric and placing it in the garden bed. The top side was easy. As we laid it down we went back around and replaced the top caps, pinching the landscaping fabric between to ensure that no weeds can grow between the fabric and the bricks.

We also wanted to reduce the amount of vines that grow around the cedar bushes and through the gabion walls, so we put the fabric fairly tight to the trunk of the cedar trees. We left enough space that the irrigation can be placed directly over the roots, ensuring that they are receiving plenty of water. Being our main point of privacy, we do not want to do anything that could jeopardize the health of them. Last year, I had to cut vines down from within the bushes, which concerned me, so I wanted to make sure that we wouldn’t have the same issue this year. Or that if a few vines somehow make it up along the trunk, that it will be easy to remove.

Unfortunately, we ran short of landscaping fabric just as we were finishing off the bed. We will have to pickup some more before we can load all the rocks into the bed. That roll has lasted us 5 years, 4 gabion walls, 2 raised beds, 3 potato towers, 1 strawberry pyramid and a planter that I built for my grandmother. The next one will not last as long because we have plans for a few more walls, as well as 4 more garden beds that I would like to clear out and add rock to with large planters. 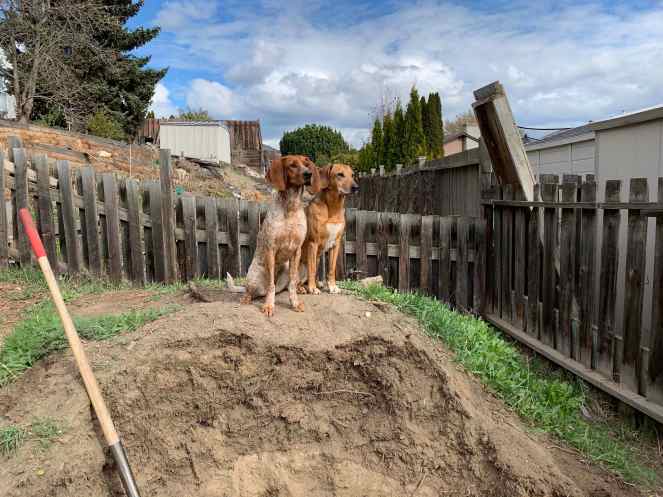 Our dirt pile is now also down to half the size. We have some filling to do behind a couple of the walls, so I am sure by summer that pile will be all but gone. The girls will soon lose their vantage point to snoop on our neighbours and their dogs.

Next step is new tires for the cart and then hauling & dumping rock.